The Case of the Keyhole Covers

I think that it is pretty significant that when I went a-Googling "keyhole covers" and "stepback covers," the very first page was full of references to V.C. Andrews covers.* Everyone who is aware of V.C. Andrews remembers the keyhole covers: a small die-cut hole on the cover that reveals part of an illustration, or stepback, beneath. Later covers have covers cut slightly smaller than the book, allowing a long peek at the edge of the stepback , but to be honest, they're just not as fun. There are also fake-out stepbacks where the cover is standard size, but has a fake stepback image printed on it. Least fun of all are the editions where the inner illustration is simply printed on the back cover.

For a long time, they were a hallmark of a V.C. Andrews novel: a cover you could stick your finger through without ruining the resale value on eBay. And now, like Pushing Daisies and those whole-wheat Chicken Caesar wraps I really liked, they are gone. How did it happen?

In the late 1970s, there was an incredibly prolific author named Stephen King.  Some of you may be familiar with his work, such as EVERYTHING, EVERYWHERE.  See, before King, horror as a genre was a highly disreputable, seedy industry, mostly confined to pulp novels.  Stephen King came along and suddenly the publishing industry realized that his name on the cover was a license to print money, and eagerly began to publish anything they could get their hot little hands on that could reasonably be classified as "horror."

Unfortunately, what they couldn't draw in was the lady-crowd.  As with so many things (sci-fi novels and comic books being classic examples), horror publishers badly wanted into ladies' pocketbooks without getting their product tainted with girliness, which might turn off their primary demographic: Teh Menz.  Teh Menz loved them some Stephen King.  Here was this hard-working, beer-drinking, blue-collar family guy--just like them!-- who wrote horror about stuff guys understood: generally Stephen King's protagonists are average Joes trying to protect their families from Very Bad Things.**  Someone had to create a gateway drug to lead Teh Ladiez into reading horror.  And fast.

V.C. Andrews fit the bill.  No one wanted to brand a novel about incest as "romance," even though stylistically, Andrews was a gothic romance novelist.  Horror was the only thing they could call it.  So long as it was selling like hotcakes, and it was published under a horror imprint, sales justified that at last, women were reading "horror."

To make this new horror genre distinctive, a lot of books began trying out new cover designs, including the embossed cover, and the keyhole cover with stepback.  (Even a Stephen King novel of this period, Misery, got a tongue-in-cheek stepback--a lurid parody of a romance cover, with Stephen King's head painted onto a six-packed, shirtless lover.)  V.C. Andrews, as one of the flagship bestsellers, became in particular associated with its cover art.  It was an integral part of the Andrews Experience: black cover with gaudy foil-embossed illustration, and the heroine's face peeking through with an expression of what I'm assuming was intended as "abject terror" that invariably comes across as "faint bemusement," "dull surprise," or "mild cognitive impairment." Exhibit A: Heaven. 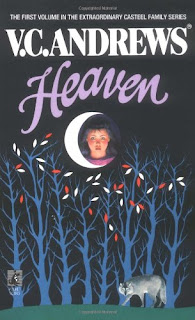 When horror sales began to flag a bit in the mid-90s, most books quietly lost their awesome covers, and several horror imprints were shut down entirely.  But V.C. Andrews was still so closely associated with an entire package, including the keyhole cover, that her novels retained their old style long after it became too expensive to make a regular habit of specialized covers for other authors.

However, somewhere between V.C. Andrews's death and the final installment in the Casteel series, her sales began to flag.  V.C. just wasn't pulling in the megabucks she once did.  Her sales were still high enough to justify retaining the old-style covers, but just barely.  Moreover, the publishing industry itself was competing with the internet for book-sales, and losing.  Costs had to be trimmed.  What they needed was an excuse to do away with the keyhole.

In 1996, Stephen King published the revolutionary The Green Mile. Well, no; the story itself is standard King fare (Y HALO THAR MAGICAL NEGRO). What was surprising was that at a time of shockingly low sales and rising prices on paperbacks, publishers discovered something interesting: that a public hesitant to shell out $5.99 for a four-hundred-page novel would line up to pay $3.99 for a one-hundred-page section of a novel by Stephen King. And they would do it six times.

What happened was Mini-Book Blitzkrieg. Several big-name authors got into the act, and Andrews's publishers figured it was a fine time to kill two birds with one stone: they would capitalize on the hot trend of serial novels, and start to phase out that pesky money-sink, the keyhole cover.

The result was the Orphans series: four mini-novels with fake keyholes on the front, and the stepback illustration on the back cover. None of the regular fans were suspicious, because hey, these were mini-novels. Nor did they raise a protest when the four smaller novels were released as a single book, likewise without a keyhole, because how could the four separate illustrations be reconciled into a single stepback?

Rebranding covers for such a formula writer as V.C. Andrews is dangerous. New covers say "Hey! We're going in a new and exciting direction, and we want you to come along with us!" But no one who's in love with a formula is looking for change. The mini-novels, from a marketing perspective, were the perfect psychological moment to tempt readers from something they were comfortable with into something just a wee bit different--not enough to scare them. Anyway, the final book in the series, Runaways, had the classic keyhole-with-stepback that Andrews fans had come to expect, and so readers read on with no one the wiser.

But then, there was another mini-series, The Wildflowers, which followed the same format and culminated in the final full-length book Into the Garden. Again, no one was suspicious. This, they decided, was going to be the format of the new mini-books, and everyone was okay with that, except that hey, when are we going to get another real series like the Logan Saga? Y'know, full-length books? The following year the Hudson series started. The keyhole covers and stepbacks returned, and everyone was happy. For a while.

The publishers, however, took this to be a sign of acquiescence. Likely there were meetings, where men who haven't seen books since their mailroom days looked at the sales and made some sort of statement to the effect that you--yes, you, dear reader!--seemed to be blithely accepting of the new cover styles and that it was time to move to Stage Two: the Full Cover, with stepback.

So it was that around the time the third book in the de Beers Saga premiered, the keyhole mysteriously vanished. 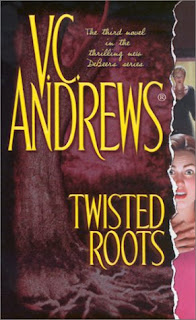 Mild consternation from the readership! What fresh hell is this? they murmured. Surely, this is an oversight. And they sat back to wait patiently for the Return of the Keyhole.

That was your mistake. You should have bitched loud, early, and often; you should have clamored for the return of the classic keyhole covers. But first they came for your keyholes.  Then they came for your stepbacks. Then, by God, by the start of the Gemini Saga, there you were, holding a boring, naked novel with no keyhole and no stepback--nothing but a lousy cheap-ass back-cover illustration.

And really, it's your own fault. Never trust a marketing department. They have no idea what people really want.

Fortunately, after this point--after going three whole series with only sad, sorry back-cover illustrations to console them--the readership apparently started mailing some letters, because the full keyhole/stepback combo returned for the very-short Secrets series. Immediately thereafter, however, the covers gradually started creeping back toward no-keyhole, stepback-only designs. And you have no one to blame but yourselves. You had a chance to stop it. Now marketing is in control. 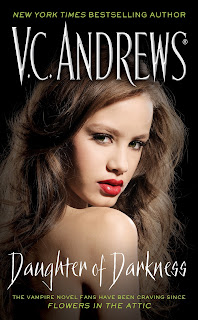 Don't come crying to me. It's your own damn fault. You saw what they were trying to do. Now they've done it. And it's up to you to set it right.


*Actually you have to Google "keyhole covers novels" to get references to Andrews; otherwise you just get keyhole cover as in "the brass plates you screw on your front door."

**Ironically, King's first bestseller, the one that made him a household name, was a highly feminine novel: Carrie, about a psychic girl who got her period.***  I suspect the universal appeal of Carrie, however, was not feminine politics but its depiction of high school.  Carrie is less a feminist revenge fantasy than it is a teenage revenge fantasy

***God, and now I want to write a crossover fic called "Carrie," in which Carrie Dollanganger suddenly acquires telekinetic powers and goes nova on those little bitches at boarding school.
Posted by The Fifth Dollanganger at 4:13 PM